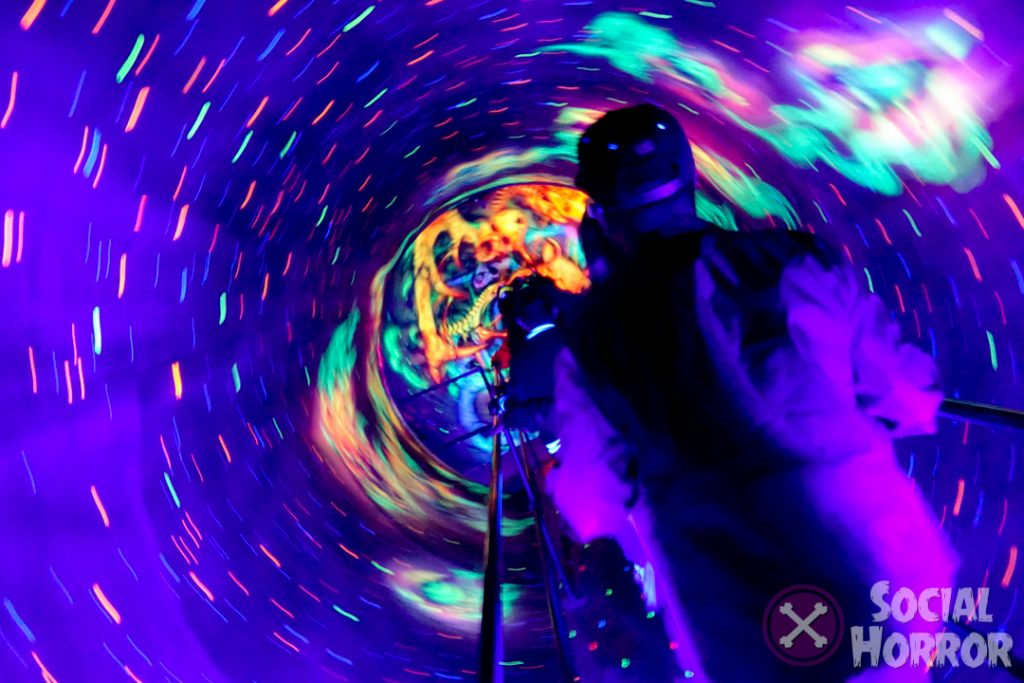 We checked out Six Flags Magic Mountain’s Fright Fest 2017 opening, with the promises that they would have some great new things in store. Pretty much nailing best theme park Halloween event in the country every year by USA Today, it’s always a great time seeing their spooky scare zones and going through their reliable mazes.

This year there were some new offerings, including a scare zone called Damned ‘N Disguise near the newest addition to their extensive ride list, Justice League: Battle for Metropolis. Scare zones like this, in huge areas with more than just scare actors playing a part–characters that many look forward to seeing every year–mingle with guests for an experience that’s attractive to all ages, and part of the event’s success not only in SoCal, but across the country.

Here are our highlights of this year: 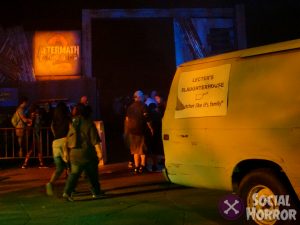 We were fans of the first Aftermath, and the return of this maze (debuted last year) is great as well as improved. You wonder through the city of Ash Valley trying to avoid those who have been infected by a virus and threatened by the militants trying to flush the infected out. The massive area is always impressive, and huge static props, fire, and sometimes confusing directions add to the fun of it. While we felt the scares weren’t as strong as they have been in the past, the demonic infected are a joy to see if you’re into that sort of thing (we are). One of the downfalls this year was too much negative scare actor space. We found that the ratio wasn’t as dense as it could have been, so perhaps a few more scare actors would make it just a bit spookier. 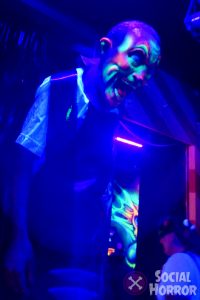 Every year this maze is so much fun. It’s one of the best 3D mazes that we’ve ever been in (sadly, a trend that seems to be falling by the wayside) and always has new interesting takes on how to scare in the same space. Also, it’s got one of the best possible-vomit-inducing-moments that many attendees enjoy seeing. Spinning tunnel of doom? I am not a fan, but it is hilarious to watch others flip out when they go through it, or in my case, hear them. Toyz is one of those reliable mazes that you can count on to give you a little jump, even if you’re the steeliest of haunt fans. 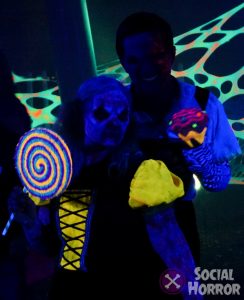 I really enjoy this scare zone because the extreme use of blacklights makes it super psychedelic and the scare actors are always a hoot to watch and their creative puns will give leave you with a few snickers between the screams. With creepy lava-spider-people on stilts, Hansel and Gretel, and many other Grimm-inspired fantasy characters roaming through, it is a great spot to people watch. After all, if you let your guard down long enough, you’ll certainly get a scare actor (or two) sneaking up behind you to deliver a well-earned boo.

Despite the good, no Halloween event, even those put on by major theme parks, is without issues and sadly, they came from both the reliable and the new:

Although I love the lore of the Chupacabra, I really think it’s time to retire this maze. For years, the maze has had difficulty finding a balance with fog, scares, and pretty much everything else. Some years there was too much fog in the maze that it made it difficult to breathe, but when we went in this year, a near total lack of fog left most of the maze unexciting. The scare actors didn’t try very hard, and resigned themselves to shrieking in our ears (which is my biggest pet peeve with any Halloween event), and we weren’t sure where the Chupacabra even was, if there was one at all. I’m no longer going to make excuses that maybe it was an off night, or maybe it was a shift change, because it seems that is what we’ve experienced every year. We hope that in the future, they seriously consider developing something new for this area, even in the same theme.

Sadly this was one of those things that was incredibly bad luck, yet has to be mentioned because it’s an issue with the park that not only I as a guest have had for years, but many have complained about. At one point, there was a sewage flood in the Demon’s Door scare zone which resulted in incredibly foul-smelling waste water (let’s be honest, it was like an overfilled outhouse) that was unavoidable to walk through, especially those in need of the restroom located in that area (the one closest to the fountain). These restrooms are always one of the most awful places to experience no matter what time of day because they reek, are falling apart, and just one of those places you feel too afraid to even breathe in. After wading through what was pretty much poo-water, and then having to use this restroom, it was just impossible to enjoy the scare zone and the scare actors looked miserable. Not only could they not slide in this area, but they were stuck near the smell, which is certainly an unpleasant working condition. Now, I suspect that the park rectified the issue within the next few days, but it calls attention to the park’s underlying problem with infrastructure. There are still restrooms that are in desperate need of repair and replacement, lights that don’t seem to work, and a general worn-down feeling that comes from hot sun, guests that don’t respect the space, and buildings that were there more than 30 years ago. Magic Mountain is a huge park, and their dedication to bringing guests a wide variety of killer attractions (seriously, Justice League was amazing), some things do get left by the wayside. Yet, it’s something important we hope the park takes a huge step towards rectifying, especially since they are moving to being open year-round in 2018.

This return of a blackout-esqe maze to the event wasn’t as fun as we had hoped. There were some really cool characters that were sadly too hard to see, and though it was an improvement from the last blackout maze (yeah, that rope thing that constantly had people bumping into walls) line management, and the whole walk through experience was seriously lacking. I find that as I get older, I want to visually appreciate what’s happening as so much artistry goes into creating props, characters, and maze design. A well-lit maze like Red’s Revenge, that has impressive prop design is a pleasure to see, even if the scare actors aren’t on the top of their game. I think it may be near the end of the dark maze era, or at least, it’s not something I would spend time going through again.

No matter the few negative experiences we had, Fright Fest is still a great event to bring the whole family for far less than you would any other theme park or major haunt event during Halloween, especially if you already own a season pass. You can experience Fright Fest on select nights through October 31st. If you head over to their site now, they are giving away 10 pairs of Haunted House Passes every day, but the sweepstakes ends soon, so go enter today!

Enjoy our gallery of who and what caught our eye!

Admission to this event was provided to Social Horror by the park.