Six Flags Magic Mountain opened their yearly Fright Fest event mid September and instead of doing a media event on opening, waited until their newest haunted house opened. We’ll bring you up to speed with what you can expect at this years Fright Fest.

Disclaimer Six Flags invited us to their media night and provided us with complementary park admission, express haunted attraction passes, parking, and admission to Spirits with Spirits. While we try to remain unbiased we do realize there is no way to avoid it for media events. We're also pass members that get included haunted attractions passes and would have visited regardless of media status.

For the most part Fright Fest remains very similar to 2021 and 2019. The stand outs this year are new scare zones, a new haunted house, and a return of an upcharge dinner buffet. We noticed right away that the Magic Mountain team has been hard at work improving the event making it feel more polished.

We've put together a guide outlining what you can expect from the event, what food to get, which houses to start with first and much more.
Haunt Guide: Six Flags Magic Mountain Fright Fest
Tip

Haunted Houses have employees directing people which line to go to for either standby or express (except for Aftermath which just had some confusing sign for express). Last year ourselves and a few other media outlets had trouble figuring out where to go and there was no one directing. This year it was much more organized and lines were moving at a reasonable pace despite pulsing groups.

Speaking of pulsing lines, Fright Fest has to be one of the last large scale haunts still doing this with such small groups. We counted four groups per batch with a really nice wait between. There was just one instance of us catching up to the group in front.

There seemed to be much less screaming from the talent which is a much needed change. It’s not scary when people just scream around every corner at you so it was nice to see that they’ve adopted more traditional scares.

The Unleashed event was WAY more organized, actually making good use of the space. The way it’s been reconfigured allows more people to watch and get photos.

Employees were all really friendly and helpful. How much of this was attributed to it being media night? We’ll find out later this season when we make a return visit. But our last couple of visits this year have also had really lovely employees help out.

Despite being a Saturday it wasn’t overwhelmingly busy like it was last year. That definitely improved the night.

The new scare zone, carnivHELL was awesome. Sure it was really lacking in decorations, but the scare actors were hilarious. They need to return next year for sure. The scare actors in City Under Siege are relentless, chef kiss.

One last thing we noticed that was a welcome change: much fewer house ops telling people to keep walking. It was mainly left up to the scare actors to push people in the right direction. It mostly worked out alright. House ops can ruin a walkthrough, especially if they wave their flashlight or shout at you to keep walking. Not this year. 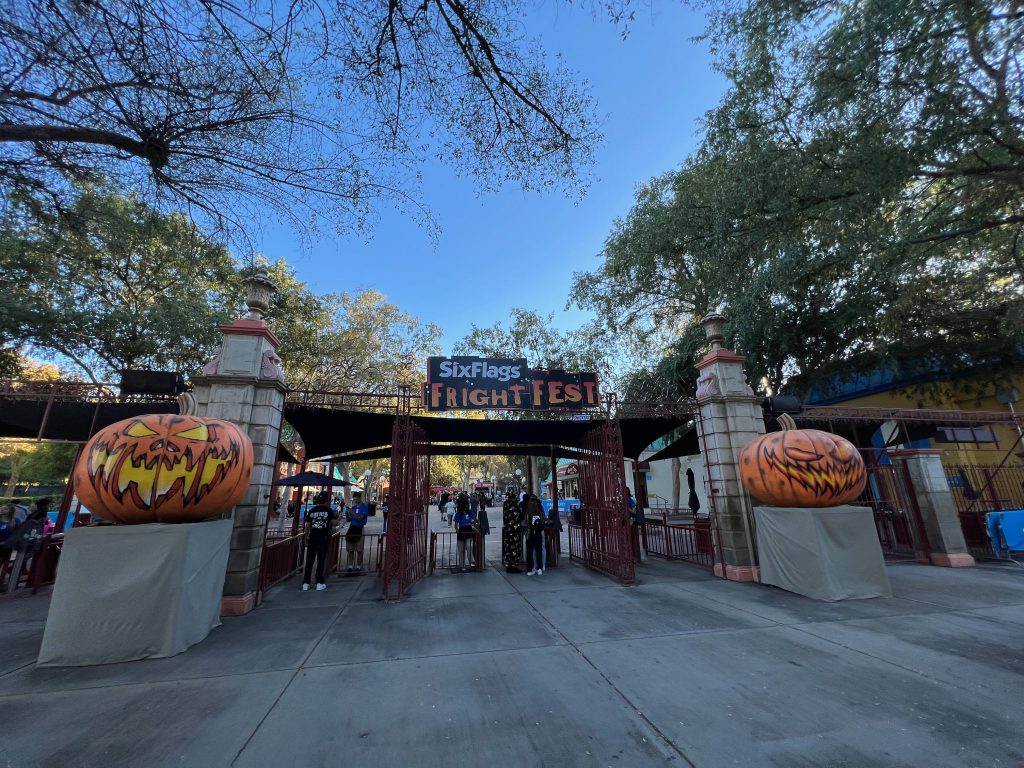 Let’s just rip the bandage off, the new haunted house was just awful. Period. We almost didn’t even get to experience it because it wasn’t open and on a whim we checked before leaving and it had just opened. There was some high expectations for it too, the facade looked nice and the concept alluring. But what we got was a pre-show with audio we couldn’t hear and a video which made no sense at all. Inside the house was just a bunch of weird shaped rooms and black hallways with paint splattered on the walls. Still no idea what the house was supposed to be but definitely seems they ran out of time and budget and phoned it in.

It’s surprising this didn’t open on time, there’s nothing really in it that complicated. Maybe it was the various bungie actors or the flying scare? We’ll let you decide if you end up going. Maybe they flesh it out more as the event goes on.

There was one scene in it that was incredibly distasteful. It had targets placed on bodies which looked as if you were supposed to stand on and the actor saying something to the effect of “watch out for the snipers”. Maybe… not do that?

Something else confusing is the lack of scare actors in some of the scare zones. Maybe we were just unlucky with cast changes but there were no actors in Terror Rising and Exile Hill.

If you remember way back Fright Fest used to have a dinner comedy show at the top of the mountain in the old pizza restaurant where you could watch some comedy magic and have a slide of tri-tip pizza, a real treat. This year they decided to bring it back as Spirits with Spirits. A clever name with a somewhat confusing theme. There was just one scare actor doing double duties checking wristbands and walking around for selfies.

Instead of using the old location, they’re now using the west pavilion. A much nicer area that should be used for their Oktoberfest with a proper beer garden setup, but that’s for another site to discuss.

There’s lots of covered picnic tables to sit at, music playing (but very loudly), a bar, selfie station, soda machine (sodas are included, but the mix tasted really off), and of course the buffet.

There’s a fairly decent selection of food available including actual vegetarian friendly meatballs. That’s a really nice addition, please don’t change it. We took pics of what was available that day but please be aware that they can, and likely will change what’s available.

For the most part the food was okay. Nothing mind blowing. The meatballs were a weird combo, they should have been just plain with some marinara sauce on the side. And whats weirder is they had rolls that could have been used to make a meatball sub.

The pulled pork smelled really off and tasted kind of fishy. The garlic rolls, mac and cheese, sausage and corn were our favorites by far.

We didn’t end up getting any of the drinks, we wanted to get to unleashed on time and if you’ve been to Magic Mountain before you’d know it’s a bit of a hike from where the West Pavilion is. It does seem that you can come back later in the night if you wanted but Spirits with Spirits ends around 9pm, not giving you a whole lot of time.

There’s also restrooms right there just for that area.

This ranking isn’t scientific and may be influenced by outside factors such as weather, crowds, time of night, cast and overall mood such as hanger levels.

It’s usually pretty tough to rank houses at Fright Fest. The first four are all really solid but returning houses. Willoughbys is nothing new but it’s simply the most impressive house Fright Fest has. It is looking like it could use some tlc. Sewer of Souls is returning as well and it’s just kind of annoying more than anything. Every year if there’s people in front they go the wrong way. Pretty sure this building is cursed as there’s yet to be a good house here.

That’s normally where our house ranking would end, with Sewer of Souls firmly on the bottom. But this year, Truth or Dare decided to enter the chat and claim the bottom spot, by a large margin.

If you go and there’s a short line, sure, check it out. But don’t wait in a long line for it. It’s such a shame they got rid of Red’s Revenge.

Magic Mountain has a ton of space to work with which makes their scare zones feel a little bare at times.  We know and expect this but it works out in their favor when you have great talent like the folks working in City Under Siege. Those sliders were making tough dudes jump. They were going after children. They were funny and interacting with people, just having a great time.

On the other side of the mountain is Nightmares a Twisted Fantasy which once again hosts some of the park’s best scare actors. Their improv is excellent and their stories entertaining.

If we had to rank the larger events on their scare zone talent it would be Knotts Scary Farm, Fright Fest, followed by Horror Nights. But wait, before you go gah, how do you tarnish the name of Horror Nights like that! The actors at Horror Nights get their scares instructed to them and have little autonomy for what they do. They have less space to work with and go for the safer jump scares. Fright Fest and Scary Farm let their people free to have fun and the end results show. We saw young teens pretty much cowering in a corner when teamed up.

The other thing that sets Fright Fest apart is using Scott Ramp. That makeup and latex work they use looks amazing. Other events just use masks.

Apart from Spirits with Spirits you have your normal theme park affair. We walked around the park looking for special food items and we only really saw the two special funnel cakes advertised. The park is running Oktoberfest and the food selections looked good, we’ll have to try that out next visit. The back side of the park was lacking food options, everything was closed when we went though. Not even somewhere to fill up our drink cups – which by the way, if you’re a pass member and have season drinks, it does work during Fright Fest.

Voodoo nights is back but we didn’t notice them playing anything that screamed Halloween. It sounded like the same set they played for Fourth of July. They’re talented, but could have been more spooky. We didn’t stick around to see the whole thing however.

We tried to catch the new show, The Rising, in Devil’s Triangle but couldn’t find a schedule and every time we passed by there was no activity other than children climbing on the stage. They should really rope the steps off.

Pretty standard event shirts, the prints were nice quality. Some sweaters and other misc items themed as well. Nothing we would necessarily buy, but still good to see more themed merch make its way to the park. They need to have a house shirt, that’s really missing. Pretty sure the shirts they have here are the same shirts every other Six Flags will be carrying, maybe with just “Magic Mountain” slapped on it.

It really depends. If you have a pass or membership absolutely. If you can justify paying for a single day park admission and a haunted attraction pass? Sure. But if you’re just coming for the night and have to pay for single day admission we’re not sure it makes too much sense. We do expect Fright Fest to get a lot busier as October rolls in this weekend and would suggest spending the extra money on upgrading your haunted attraction pass to express. Just make sure you know what you’re getting into by reading our Haunt Guide to Six Flags Magic Mountain’s Fright Fest.