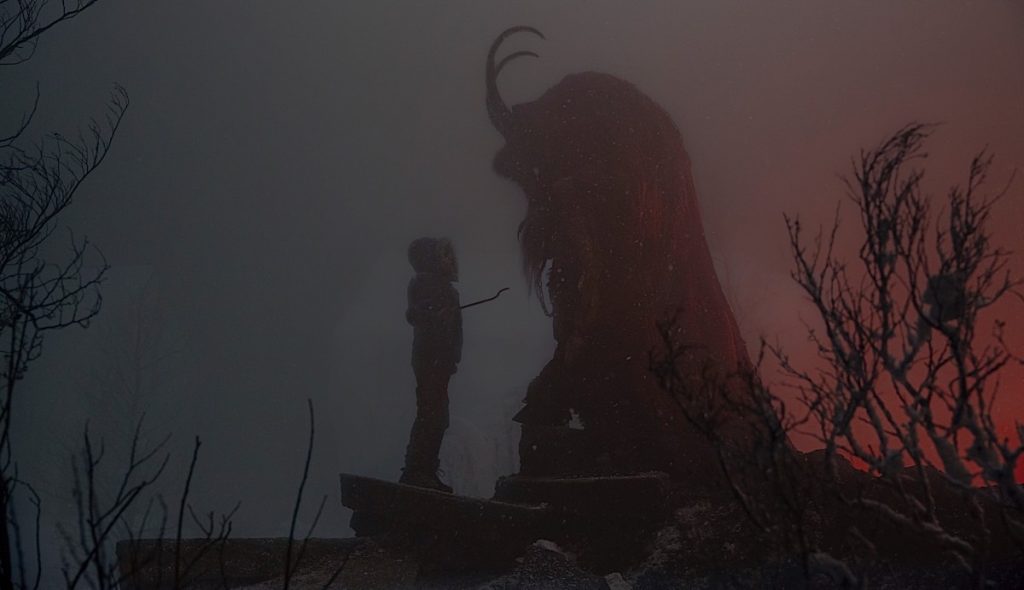 From Legendary, Universal, and director Mike Dougherty comes a holiday horror film that fans have been itching for since the Christmas Devil launched into mainstream culture.

Here is the film’s synopsis: 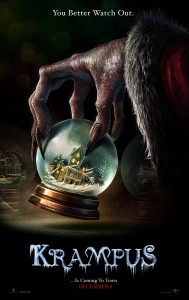 When his dysfunctional family clashes over the holidays, young Max (Emjay Anthony) is disillusioned and turns his back on Christmas. Little does he know, this lack of festive spirit has unleashed the wrath of Krampus: a demonic force of ancient evil intent on punishing non-believers. All hell breaks loose as beloved holiday icons take on a monstrous life of their own, laying siege to the fractured family’s home and forcing them to fight for each other if they hope to survive.

Krampus was my most anticipated movie of this year. When I heard that there was going to be a Krampus movie made, I was über thrilled and waited anxiously for the project that Dougherty was behind. Of course, I had my reservations—not because of who was involved with the project, but the resource material.

Although many people are somewhat familiar as to what (or who) Krampus is through references in mainstream media or shows like Family Guy or Grimm, the general audience is probably less familiar with (mainly) Austrian and other German-speaking holiday traditions like the demonic figure that punishes children for behaving badly throughout the year. To briefly explain, Krampus visits naughty children on Krampusnacht (December 5th). Many variations include giving children shitty gifts like coal or little sticks, or go as far as whipping them, stealing them, and even eating them.

Essentially, Krampus is what you tell children to traumatize scare them into behaving, leaving Santa to be the happy do-gooder.

This is why I had reservations—Krampus was one of those things that anyone attempting interpretation for a larger audience might have a difficult job. Although marginally successful in aforementioned shows, any sort of serious portrayal of the character, the myth, and a story would have many obstacles.

In the newly released film, some of these obstacles are apparent and although they don’t ruin the film, there are a couple of things that rub the wrong way.

The film begins with a play on the Christmas film tropes with a twist of commentary on how consumerism has warped what should be a joyful holiday full of cheer. Already, we’re placed into the context that everyone in the film is under stress from the holiday and all is not right with the family and the main character, Max (Emjay Anthony) is suffering from the Christmas blues. He takes solace in his Omi (also slang for Oma, which is obviously German for grandmother) who has baked a huge spread of fantastic baked goodies.

This was probably the scene that settled my nerves about some things I was worried might be missing from the film, particularly, the elements of origin including use of the German language and culture. I was pleased to recognize some classic German treats including Stollen, and I was over the moon when Omi (Krista Stadler) spoke beautiful and non-stereotypical German to her grandson, Max. (I wish more films utilizing the German language would cast/hire better speakers/assistants/translators.) Although it might seem like just another detail to some, I deeply appreciated the authenticity, which demonstrated that Dougherty really did enter the film with the means of preserving as much of the origins as possible.

However, I feel like in the beginning of the film, the classic Christmas film tropes started to become cookie-cutter and overcomplicated. While the core family itself, was starting to blossom in interesting ways and felt almost natural, the character development halted when the extended family started to arrive. Sarah (Toni Collette) provides a tight-lipped welcome to her sister, Linda (Allison Tolman) who is joined by her husband, Howard (David Koecher) and their small army of children in a very Lampoon’s Christmas Vacation sort of way; the gun-toting in-law with space-cadet children, the dog, and surprise…we also brought that drunk aunt everyone hates. While some of the characters are central to the plot and instigate the event that gets the rest of the film rolling, I don’t think they were all necessary, especially the crying baby, which her only purpose was to give aunt Dorothy (Conchata Ferrell) something to do other than drink for most of her screen time.

Not only does this now Lampoon family dominate the screen with their loud arguments and stereotypical Christmas trope disruption, I think their over-the-top characterization silences any further development between other characters, developments we’re not privy to watching, but rather told exist through Max’s letter.

While a few things were obvious, things that seem to slip by is the distance Max’s parents have suddenly developed between one another. They do seem a little checked out, but this can also just be taken as a result of typical holiday stress. When things finally start falling apart, the parents unite as one, but I’m not sure the distance between the characters was even there in the first place. I felt that their conflict didn’t really propel the story forward in any way, while Tom (Adam Scott) and his brother in-law, Howard, definitely had enough tension built between them to give the story a little depth.

When the shit finally hits the fan, the film really does develop into a glorious storm of a holiday-fueled horror film. Dougherty does very well in this respect, and the mood was set so well that when the snow started falling and the temperature dropped, I started to get chills. In fact, the rest of the film, I felt myself wishing I had dressed a little warmer.

When the blood starts to flow (although it was only a little), we learn the story of Krampus and his minions through Omi—who has been speaking German the entire time—in English. I understand that it would have been silly to have someone translate the entire tale, which is represented on screen with some gorgeous and almost Harry Potter and the Deathly Hallows style animations, I also understand that many American audiences don’t like subtitles. Yet, the sudden English from Omi (which is later joked about) is a little jarring. I think I might have liked either a short summing up of her tale by the grandson, or maybe a little code-switching between Omi and her son and grandson to demonstrate that while she does speak both, she prefers her native tongue when speaking with family. Personally, I really enjoyed when the subtitles were dropped and either Tom or Max did a little rough translation. As someone who speaks German, I appreciated that there were a few things that got lost along the way, as if it was a little inside joke that was reserved for those of us who are a part of that world.

The mythology of Krampus in this film, however, becomes very different. While some of the same “punishing” ideas are still present, the myth was changed to better make a story that fit the context of the Christmas Eve holiday that gets disrupted. This was one of the things I worried about the most when finally seeing it. Although I know that it’s hard for audiences to grasp that Krampusnacht happens way before Christmas, and that beating children isn’t exactly something that might grab a large audience (or be looked well upon), I think the writers (Dougherty, Todd Casey, and Zach Shields) did a good job of transforming the myth that general audiences could understand and hold on to. At one point, you’re rooting for Krampus and his minions to nab certain characters, and disappointed when no mercy is shown for others.

What I really appreciate above all things is the way Krampus was finally unveiled. In the trailer for the film, Krampus is never revealed, and you don’t see his full horrific appearance until the appropriate moment in the film which only adds to the film’s most marvelous aspect: horror fueled by tension. The actual overall look of Krampus, many will revel in Dougherty’s unique take and find satisfaction in his design. While he’s not exactly what those familiar with the character envision, I thought it fit the film very well.

As for the rest of the film, while many mainstream horror films are filled with gimmicky elements like jump-scares and senseless gore, and while there are a few jump-scares in the film, much of KRAMPUS is propelled by really well constructed tension and fight sequences that are high-anxiety and disorienting, allowing the film to break away from usual horror film expectations. In fact, the rest of the movie does that up until the end.

Without spoiling the interesting way the end is crafted, I will say that although I really, really enjoyed the middle bits of the film, the beginning and the end really felt like they dragged on. The beginning had its Christmas film stereotype issues and the end put my bullshit meter on high. There was a point where the film could have ended and I would have been okay with that, but I could also see where the general audience would be incredibly dissatisfied. I almost threw my hands up in the air and walked out when the end continued, and yet, when it was finally over, I felt a little better, but not totally satisfied.

The “bullshit” moment was so utterly jarring that it was like trying to scoop ice cream back into the cone after dropping it in the sand. While it’s still ice cream, it’s still covered in sand. Though you can try to eat the middle bit and still have your ice cream, that sand is still there and it’s not going away. Dougherty and his writers probably intended the end to make you feel that way, but I felt it discredited the really great parts of the film rather than supporting them.

KRAMPUS was certainly a fun movie, and it was refreshing to see another holiday horror film that horror fans can put on during the holidays. While it could be classified as a horror comedy, there was plenty of drama and even a few tear-jerker moments that holiday films are chocked full of. The film also has some pretty fantastic performances. Not only does Adam Scott have the ability to put a smile on just about anyone’s face, Emjay Anthony is the boy you wished had been in Jurassic World, and Toni Collette brings some great motherly fierceness to the whole recipe.

While it might not have been the horror movie that us Krampus fans wanted (yeah, I’m that twisted) I think horror families would get a kick out of making this one of their Christmas traditions. Although there were quite a few hiccups, it’s a great antithesis of the classic Christmas feel-good tale and ultimately satisfying to those who are already fed up with the holidays.

KRAMPUS is now open in theaters everywhere and you can check out the trailer below: