Back in August of this year, I was given a copy of the first book in the Alpha Wolf Series, Demon’s Prize by writer and supernatural lore enthusiast, Jennifer Maimone. 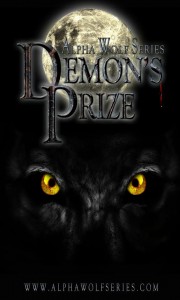 For months, socially withdrawn Dr. Brent Carson has been reading about women being abducted throughout the city, the most recent article revealing how all of them may have been practitioners of witchcraft. Out of curiosity, Brent decides to personally investigate what is going on, but is distracted when four friends move to the city, all of whom he knows to be werewolves – except for Angela Dane, who is only half.

Angela is an energetic, talented and very spirited girl. She is extremely close and loyal to her friends, but the first moment Brent sees Angela, there is something about her he finds disturbing. He cannot understand why, but his first reaction towards her is one of hatred, inexplicably feeling as if she shouldn’t even be alive.

That night, Angela is attacked by a psychotic demon, one who has been stealing paranormal beings for centuries and taking them to hell for his personal version of trafficking. The demon almost claims her as his newest prize, only to have his interests quickly switch to Brent the moment he learns of his true identity.

In my adult life I have not really been drawn to young adult fiction. Although I was a fan of Harry Potter growing up, my entrance into the world of reading really began with some very adult horror novels. I read Silence of the Lambs by Thomas Harris at a young age, and for as long as I can remember, the first Stephen King novel I picked up—Cujo—swept me off into the glorious world of terror on the page.

Since the prevalence of the painful-to-think-about Twilight series by Stephanie Meyer, I have pretty much stayed away from any books that even feel like they took inspiration from Meyer’s success in popularity. Perhaps that’s partially why it took me so long—other than the fact I still have PTSD from graduate school—to get through this novel?

Yet, this book has travelled nearly everywhere with me in my day-to-day routine. The book has been on my nightstand, in my computer bag, my work desk, the bathroom, on my couch, in my car, and pretty much anywhere else a book-lover might carry their current reading project so that when there are a few moments of freedom, one can consume a few more pages. I have been in the world of this book for months now, and despite a handful of shortcomings, the reason for such a long delay really comes down to one fact.

I really enjoyed this novel.

Through classic young adult writing conventions, Maimone crafts a story involving supernatural beings that is not only—at the core—a great werewolf tale, but a story that balances out elements of horror, thriller, and young adult drama to absolutely beat the pants off of any sparkling vampire story out there.

With only a small handful of characters, the story follows a small pack of young werewolves who suddenly find themselves involved in a battle with a very tough and brutal demon who has his eyes set on collecting unique supernatural beings to barter on the black market of the underworld. At the center of this tale is Dr. Brent Carson, who could be in some crossover universe, Bigby Wolf’s—from Bill Willingham’s Fables comic series—long lost brother. A loner werewolf with some serious power along with young Angela Dane who is what some may call, a hybrid.

Although I don’t want to spoil it, we learn early on that Angela is somewhat of an oddball in the pack of werewolves she belongs to, and that becomes one of the centers of conflict throughout the story. For readers who enjoy the classic tropes of young adult novels, Demon’s Prize is dripping with them. Angela is relatable as a young woman who feels somewhat alone, and frustrated with trying to do the right thing for someone who is an insufferable introvert. Yet, the convention of repetitive actions, phrases, and emotions she feels over and over begins to get tiresome. In young adult fiction, it is commonplace to repeat character actions so that young readers can continue to stay with the story and aides in training reading comprehension. I felt that at some points, this was done almost too often and sometimes slowed me down as a reader.

Brent’s character, the grizzled and experienced werewolf who becomes entangled in the lives of what he calls, “young pups” can be, at times, incredibly infuriating. This, however, feels intentional. It is clear that Maimone was developing characters you could simultaneously be cheering for, and just a few pages later, throwing your hands in the air, yelling, “Why did you do that? Haven’t you learned?!” Creating an emotional bond between the reader and the characters is something Maimone does very well. She has not only created a company of individuals who have depth and relatable complexities, but individuals who are important components to the development and motion of the story rather than empty mouths for the sake of content. Each character has a history, and although we may not yet have all their stories, they each have their own inner and outer conflicts that are becoming well-crafted character arcs without overcomplicating the main story.

However, one of the short comings I feel that is more the fault of the mainstream genre than of the writer, is the rapid shifts in focalization. What I mean by this is that in one minute, we’re dealing with Angela’s inner thoughts and seeing the novel’s world through her perspective, and then a few sentences later, we’re in Brent’s head, or Tony’s head, or any of the other characters without much break. Typically, young adult fiction takes on an omniscient sort of narrating voice, but I think jumping from one character to the next without much issue creates a little bit of confusion and at times, was problematic for the flow of each sentence. More than once I felt myself losing my place and having to read sentences and paragraphs over again because I forgot whose head I was supposed to be in.

Another one of the elements that I felt belabored the text was the back and forth internal dialogue some of the werewolves had between one another. While Maimone tries to make it clear through formatting and repetitive word and phrase use, the combination with the rapid shift focalization made things pretty confusing at times. Yet, with time and patience as I moved through the text, it wasn’t something that ruined the overall story or made the novel unreadable.

Maimone’s talent and dedication to her work is made clear in what I thought was the two strongest elements in this novel. First, from the outside (the metaphorical outside meaning the overall concept of the story), the book seems like just another supernatural young adult thriller when it is actually chocked full of the elements of horror. Although we’re not talking the sustained creepy narrative near the likes of King, there are many moments where the novel becomes an anxiety driven, grisly, and downright brutal to the point where you might find yourself putting the book down just for a breather. This is done in a way that could also convert the supernatural only fans into the world of the horror genre.

The second component is Maimone’s knowledge of the supernatural and her relation of that knowledge to the reader. While at times, it sometimes becomes too much information at once, and slows down the pacing of the narrative to a crawl, it is clear that she wants to set herself aside from large supernatural generalizations and provide readers with more than just a few dabblings in the lore. I deeply appreciated the information even when it felt like it was slowing the story down, although I think some of this information could be incorporated a little more seamless in the future, I never found myself asking, “Yeah, but why?” Maimone’s voice is very strong in that respect, and I think makes for a story that can go more places and have readers less confused as to why things are happening.

To sum up, this first installation into Jennifer Maimone’s new series is a fun and rich read, full of things that supernatural young adult fans will really enjoy. Although it’s clear that the target audience is for those who might relate to young introverts, if you’re familiar with the young adult writing conventions, don’t mind a bit of youth-like drama, and are into the supernatural and horror, Demon’s Prize might just be the next book you can sink your teeth into.

You can check out Jennifer Maimone’s art and her books on her site, follow the Alpha Wolf Series on Facebook, or pick up a copy for yourself, or a horror/supernatural fan you know will enjoy it.

Plus, it’s a way better love story than Twilight.