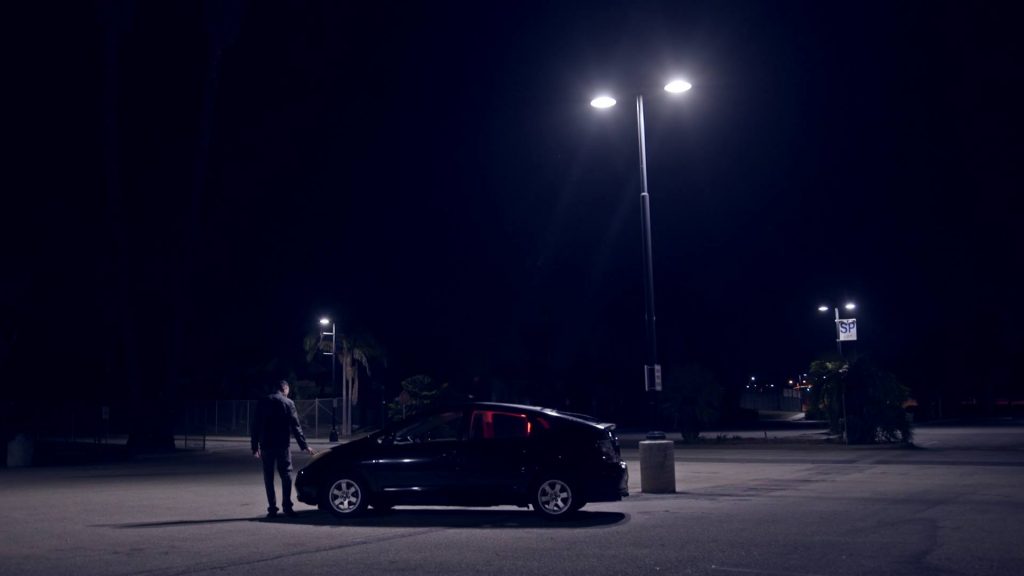 A few months ago I got the chance to see a locally made film that while it wasn’t calling itself a horror film of sorts, it definitely fit a great deal of qualities for the genre and—at least I thought—was a pretty neat take on a what new horrors lie in store in regards to intelligent vehicles and ridesharing.

When Max (Javier Ordonez) has a disturbing incident with a driver from a transportation network service, he decides to become a driver himself. But there’s something alluring and insidious about the car. Max becomes psychologically attached to something corrupt in its programming. By time his fiancé confronts him about the sudden decision to be a driver, the car possesses Max completely. A whole night of terror and massacre unravels as Max becomes the conduit of a dangerous psychopathic spirit with a thirst for vengeance. But who is really in control?

Except, the film was more than that. Besides the mystery and intrigue around Max and his relationship to an Asimov-dystopian-nightmare-Prius, there’s an underlying story that has to do with abusive relationships and the things we attach to when we need to cope with the stressful events of our lives.

Directed by Joss Refauvelet and written by John-Arthur Ingram, the film begins in this strange mixture of storytelling through the lens rather than character dialogue which both worked and didn’t work.

The visual story gave us an anti-social-type who becomes a killer through means you don’t quite understand—and that works for a while, but without meaningful words, and too much repetition of driving, no speaking, and murder, starts to lose novelty and becomes a little boring. Yet, I think the film begins in this way to illustrate, in a way that’s either too subtle or too smart to pick up on in the first viewing, that the main character we should be focusing on is not Max, but the car.

However, the film takes a turn when we learn the history of the car and the mystery of why Max and his Prius-but-can’t-really-show-it’s-a-Prius have such a weird, murderous bond. The story of original driver, Shelby (Kimberly Rogers) and her husband Henry (Nigel Chisholm) paint a picture of relationship pain and offer the film some delightful moments.

Shelby is a character that seems to have a history of struggling with her self-esteem under the thumb of her mean-spirited husband Henry, who is redneck-meets-Malfoy, except much wittier in his insults and not blond. The exchanges these two have over the course of a good mid portion of the film brings a needed balance, one that I thought could have been introduced much earlier. The car’s strange disposition gets explained and ideas of Max as a psychotic ride-app driver become dispelled. Instead, the film’s already present shadowing of Christine become more of a modern take that picks up on the very real uncertain and terrifying if it all goes wrong future of making our cars smarter.

But before I get ahead of myself, let me go back to Shelby and Henry, which, I was disappointed got lumped so close together in the film. Although it does work as is, I felt that a little balance between the two narratives would have provided more context early on and to give the audience something to hang onto rather than crossing your fingers, hoping that there was a point.

Shelby and Henry’s relationship, although an incredibly abusive one, also has some of the funniest moments of the film. Henry’s disgust with his wife’s new hybrid car is highly amusing and leads to some great lines that deliver audible laughs. Shelby gives the audience someone to empathize with. She takes solace in being a rideshare driver and bonds with her car in a way some can relate to. Shelby’s soothing, happy drives are comforting both for her character, and the audience. The moments create even more anxiety and tension before returning to the violent parts of the narratives.

When the film returns to Max and his nighttime drive through beautiful downtown Ventura, things escalate and although the final “twist” isn’t as strong as it could have been, the shots are quite good, which is another one of the film’s strong qualities. The film also showed strength in the writing of Shelby and Henry’s relationship, as well as some really cool and gross FX work by Rich Rink who has done special effects make-up for Dead Zone 805. One of the best kill-scenes in the film is when the passenger seat overheats and cooks a young woman’s back, leaving her skin all stuck to the leather and it’s pretty much my worst fear of using heated seats in a pair of shorts.

After the premiere of the film, there was a little Q&A session with the cast and crew which gave some really great insight to a few visuals I really liked. The first was a handful of aerial shots that were done over the city, all of which were shot with drones. Another few important things that one may not see upon first viewing was a play with lights (red and green) as part of storytelling, and that, like I said earlier, the car was actually the main character of the film. There were some interesting tidbits about how cramped crew were and how some of the in-car shots were achieved—stories about late-night shooting and all-around, the cast and crew were rather pleased with their finished product and that was a delight to see.

What is also remarkable about this movie is that for a low-budget, it was really, really low-budget. We’re talking $5,000 and 10 days of shooting low. If you were to ask me before I found out how much this movie cost, I would have said it was much more than that.

I’m not going to tell you this was the best low-budget horror film ever made, but it was a lot better than some of the larger budget “b-movie” attempts at horror I’ve seen lately. There were some cool dark takes on what we take for granted in our day-to-day, especially those who use rideshare apps like Uber and Lyft, which PRND will forever make me check to make sure I’m getting the right driver and just say “nvm” to anyone who is driving a silver Prius and don’t match their profile pic.

It was especially wonderful to see something made local to me with such passion and dedication—an admirable quality, especially in horror today. There is a lot to be said for when you see those you know succeed in what they are passionate about and I do have to admit that seeing this crew’s passion made me a little more biased towards the film. Again, I don’t think it was the greatest low-budget out there, but this film leaves a lot of room for a sequel and I would definitely pay to see it.

You can check out the trailer below and keep a lookout on their Facebook page to see what may be in the future for PRND.

*This was edited on 6-13-17 to change Kimberly Peters to Kimberly Rogers as her listing on IMDB was incorrect and to add information about the film’s budget and how long it took to shoot.