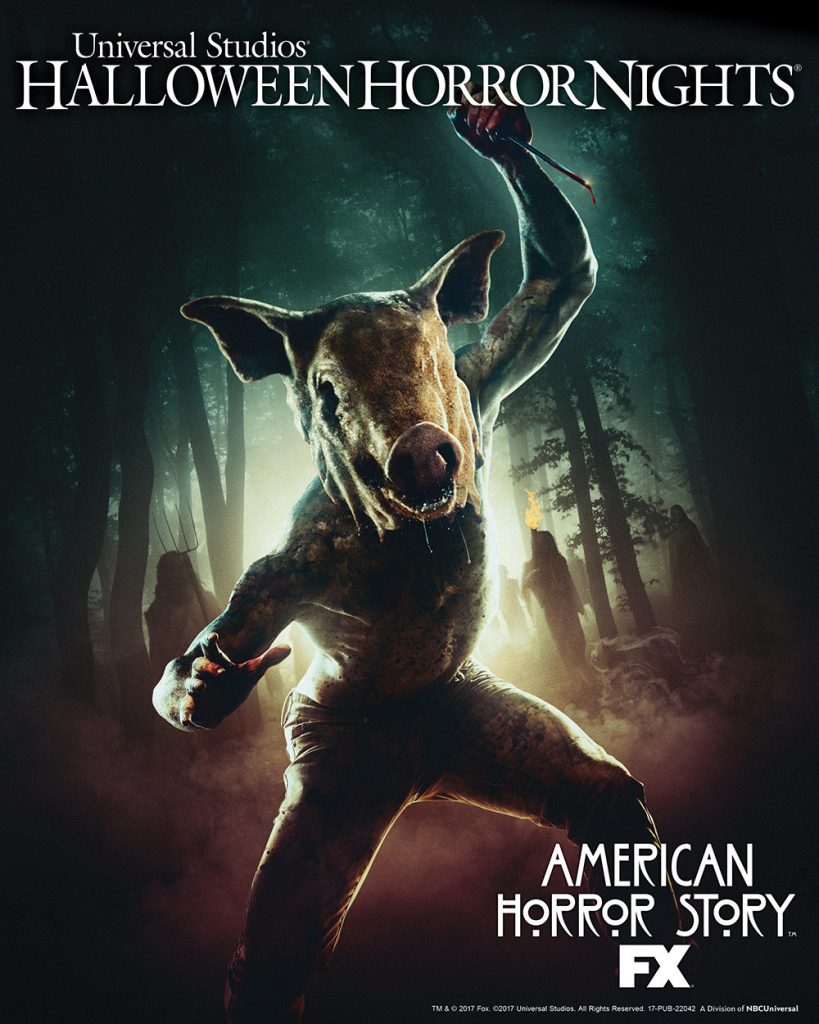 “American Horror Story: Roanoke” will unearth the twisted legacy of The Lost Colony of Roanoke, transporting guests to the haunted backwoods of North Carolina where they will experience the terror that has tormented the town for centuries. The all-new disturbing maze, reimagined in acute and disturbing details, will unmask a cast of deranged killers, from the cannibalistic Polk family who subsist by feeding upon innocent victims to The Butcher who thrives on human sacrifices. Trapped in a vicious circle of evil and murder, guests will find themselves in a life or death battle to outrun the nightmare of Roanoke before the vindictive spirits and demented killers soak the earth with the blood of their victims.

“The macabre mind of Ryan Murphy brings a treasure-trove of limitless possibilities to ‘Halloween Horror Nights,” said John Murdy, Creative Director at Universal Studios Hollywood and Executive Producer of “Halloween Horror Nights.” “Because of the multitude of terrifying layers that come to life within this latest installment of FX’s ‘America Horror Story,’ we are devoting our entire maze to uncovering every twisted detail to fully immerse our guest into the Roanoke storyline.”

Additional details about the event will be revealed soon. For more information, visit www.HalloweenHorrorNights.com/hollywood.

ORLANDO, Fla. March 29, 2017 – This year, one of the most terrifying and unspeakably gruesome shows in television history will return to your nightmares with even more twisted tales of terror.

Universal Orlando’s all-new, incredibly-detailed maze will bring three new installments of the “American Horror Story” anthology to life. In Asylum, guests will travel through the decades of the notorious Briarcliff – evading Dr. Arden’s grotesque human “Rasper” experiments and coming face to “face” with the serial killer, Bloody Face. In Coven, New Orleans aesthetics will surround guests as they’re drawn into the bloody rivalry between the descendants of the Salem witches, the voodoo Queen of New Orleans Marie Laveau, and the sadistic Madame Delphine LaLaurie. And finally, guests will relive the horrific story of the Millers in Roanoke – where they’ll be at the mercy of Piggy Man, the grisly Polk family and the ghosts of the blood moon.

“We are thrilled to bring the incredible storytelling and iconic characters of ‘American Horror Story’ back to Halloween Horror Nights for a second year,” said Michael Aiello, Sr. Director of Entertainment Creative for Universal Orlando Resort. “Last year, ‘American Horror Story’ was the highest guest-rated haunted house in Halloween Horror Nights history – and we can’t wait to immerse our guests in all-new horrors from the show.”

Halloween Horror Nights at Universal Orlando will run for a record-breaking 34 select nights from September 15 to November 4.  Guests will face all-new haunted houses based on iconic horror films, terrifying hit TV shows and haunting original stories; multiple scarezones where hordes of menacing “scareactors” stalk their every move; and outrageous live shows. And when they need a break from the screams, guests can enjoy some of Universal Studios’ popular rides & attractions throughout the evening.

Additional details about the event will be revealed soon. For more information, visit www.HalloweenHorrorNights.com/Orlando.

Check out a few photos from last year’s Hollywood maze! Are you excited by this news? Let us know your thoughts on Twitter @socialhorrornet