The Reign of Terror Haunted House is located in Thousand Oaks and this was their 15th annual event. We are ashamed to say that it was our first time in all of our haunt-attending experience.

With 70 “rooms” and over 12,000 square feet of haunting space as the advertising hook, the unusual location of this space (located over a Gold’s Gym in a shopping center), you’re not sure what to expect when you hear about this event. Local to the Ventura County area, we were familiar with the Janss Marketplace, but never knew that such an event took place because our area isn’t well known for putting on many haunted locations.

With 70 “rooms” and over 12,000 square feet of haunting space as the advertising hook, the unusual location of this space (located over a Gold’s Gym in a shopping center), you’re not sure what to expect when you hear about this event. Local to the Ventura County area, we were familiar with the Janss Marketplace, but never knew that such an event took place because our area isn’t well known for putting on many haunted locations.

We arrived a little after opening the night before Halloween, not knowing what to expect. A little lost from the parking lot, we eventually found the RoT box office and were greeted by a lovely vampiress who explained the haunt rules and was genuinely excited that we were going to experience the haunt for the first time. While maintaining her “character” she wished us well on our survival and we made our way to the nondescript entrance covered by security. Already we were pleased, although our experience with the box office being brief, we could tell that these individuals cared about their event and were invested.

Although the entrance was bleak and awkward being near a gym full of muscles working hard, when we finally made our way up the stairs to the story above the Gold’s Gym, our jaws dropped. 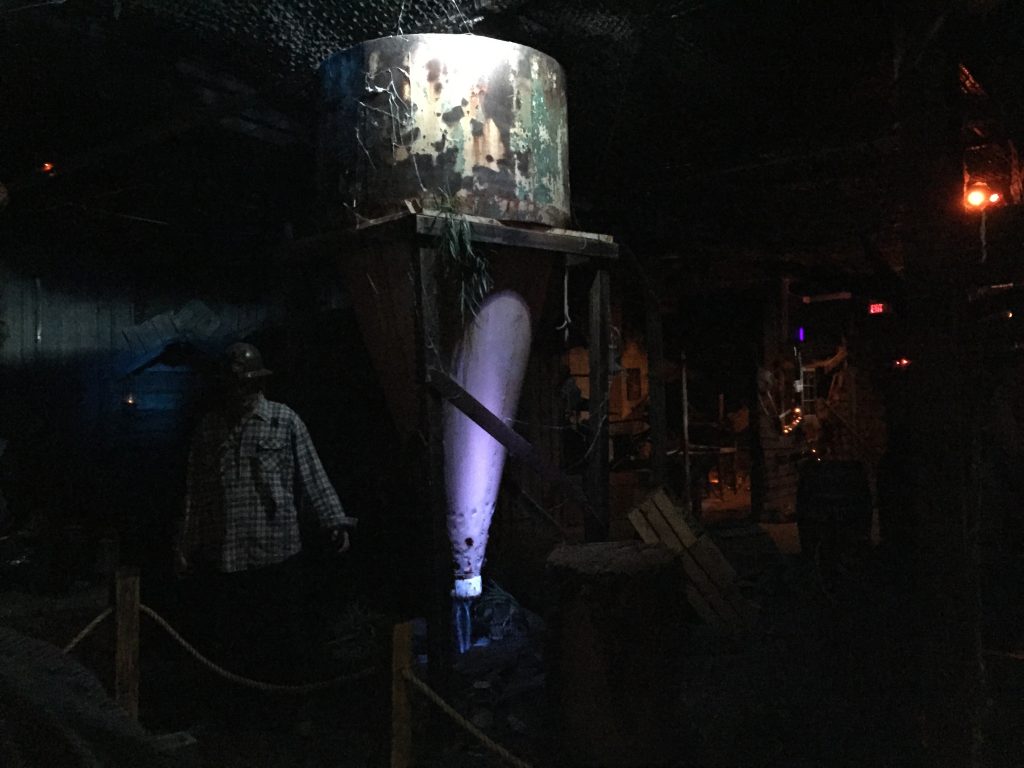 The decorations surrounding the queue really set the mood.

Waiting in line for haunts is one of the worst things. Having waited many hours during events like Horror Nights, shivering in the crisp October air and shuffling through twisting mazes of metal to spend less than five minutes going through the main event, I had never been so excited to wait in line for a maze in my life. The queue for RoT had so much detail that I was disappointed the wait wasn’t longer. Taking on the theme of “Miner’s Revenge” (the first maze you experience in their five maze lineup), it felt like the queue was part of a small deserted mining town and included a water tower, a saloon, and even the sheriff’s office that included a periodic “hanging.” The burnt up, animatronic sheriff explained the rules every few minutes and the rest of the queue ran through the scary sounds and other animations. A skeleton sprang up out of an old wooden coffin, the man in the noose dropped and hung by the neck, and just before heading into the abandoned mineshaft, we walked underneath a huge rock facade that definitely rivaled anything else we had seen before.

One thing we really love about smaller haunts is the affordability of smaller groups in at longer intervals. Once at the front, we waited for several minutes before the two of us were let in alone. Immediately we were thrust into a tight space that served as the mineshaft. Although the phrase sounds silly, the first minute or so of winding through the maze was utterly haunting. Devoid of scare actors and only had ambient music and a few special effects to set the tone, we were put on edge as we were not used to experiencing a haunt in this manner. At least not for some time (as I have said, I have experienced haunts like this about 12 years ago in Arizona). Finally, scare actors started creeping around the corners, startling us, and getting us on our way through a 30-minute trip through five different mazes all rolled into one.

What was most remarkable about the entire experience was the detail in each room and the ability to linger longer than you normally would in a haunt maze to take all those details in. One of our favorite areas was “Blood Manor,” which was something akin to a Hannibal-esque wet-dream (or more fitting, blood-dream). The rooms of this maze were awesome. They were horrible. They were bloody and gory and disturbing and part of the way through I nearly lost my mind I was so impressed. Between the living room that had strategically placed bloodstains any horror aficionado might consider as decor to the kitchen that had every container–including a 55-gallon drum–brimming with body parts and blood, I wanted to stay there forever to marvel in the risk with creating something themed in this way as many people cannot stomach the sight of blood and gore. We were pleased to see such a risk taken and executed with excellence. 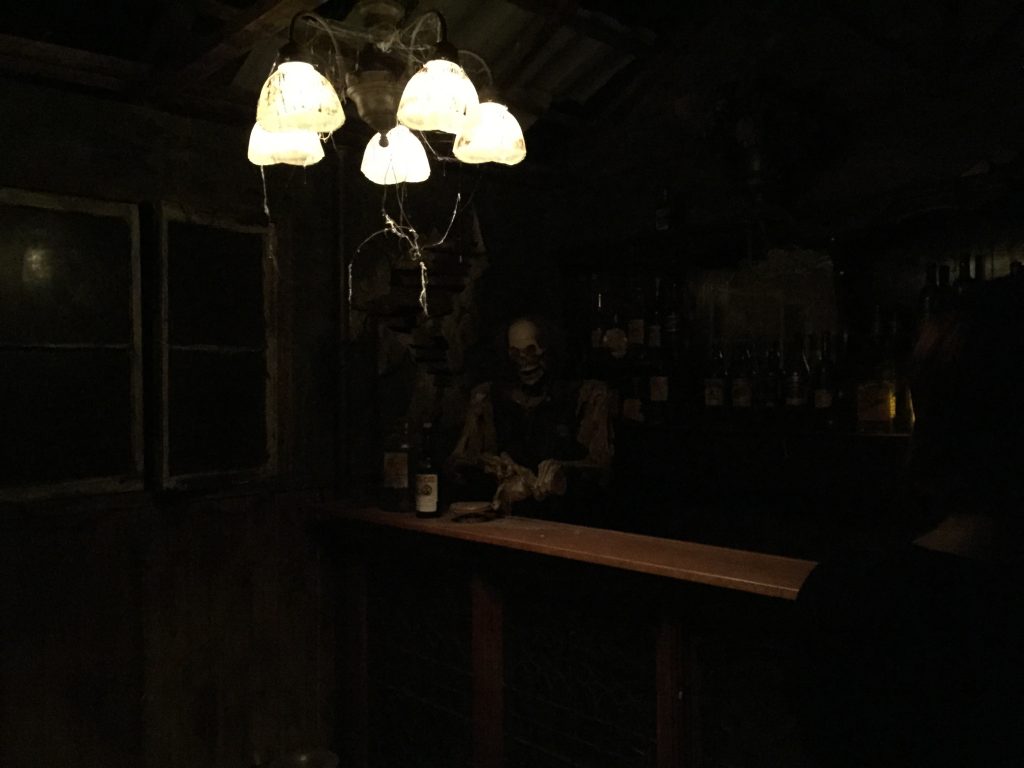 The queue alone is worth a visit.

High levels of detail were not limited to the queue, or anything I have mentioned so far. Every single inch of the entire haunt was carefully (and probably painstakingly) attended, completely immersing us into each room. There were a few smells throughout, something growing in the haunt industry, ambient music, carefully worn furniture, family photos, rust on disgusting and old operating tables–nothing was left out and these decorations and details to the point that Horror Nights was being put to shame.

Although, it must be noted that RoT spends all year working on mazes and has the comfort of time to execute these wonderful details. While Horror Nights does amazing detailed mazes in an incredibly short amount of time, they also have the comfort of manpower and large flows of cash to fund these kinds of details. RoT, having operated now for 15 years, they have only had the Janss Marketplace location since 2009 and their current building since 2010. Growing as they have, it is hard to imagine that this professional haunt that donates proceeds to the local Recreational Center has the same kind of resources that are available to Horror Nights. This makes the RoT haunt event an incredible feat and an absolute pleasure to experience.

All-in-all, this haunt came in second to Horror Nights in our experiences this year. For the price of a regular ticket ($17 regular admission, $25 VIP), the event was more than worth the price. We didn’t wait long because we got there early. Don’t listen to anyone who complains about the wait (we hear it can get long sometimes) because you will be getting one of the best deals and experiences in Southern California.

We can’t wait to experience this a few times next year, including an attendance to one of their “lights on” events they do at a bargain of $5 to see all those great details lit up and in full view.

If you missed out on this event this year, check out the RoT site gallery and their videos to get little morsels to hold you over until next year.