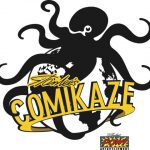 Last weekend I attended two days of Stan Lee’s Comikaze to check out a few panels and what is going on in the realm of popular horror. Although this convention does not seem like the place to get your haunt factor in, there were a few promoted movies, some panels, and quite a few vendors that served as a reminder that the horror (sans zombies) is still out there kicking and screaming.

After attending an awesome panel that I will talk about at the end, I cruised by the MUCK booth where Steve Wolsh’s team were promoting their ultragore film and looking for support for their Kickstarter to produce the prequel. Although the trailer highlights the film’s abundance of boobies and copious amounts of blood, the [red band clip] of the film shows that it seems to make fun of itself and point out all those conveniently awful components of this branch of horror we all seem to love.

MUCK should see a release on Friday the 13th in March. More info can be found on the MUCK site as well as info on their Kickstarter to produce a prequel.

Another movie that looked pretty interesting was Crazy Bitches, in which seven women and one super flamboyant gay guy take a trip to a ranch for some fun times. The trailer is incredibly short and is again in the vein of hack/slash horror, but the concept of how each character dies of their own vanity that makes it most appealing.

Finally, what I was most excited to see before making my rounds on the main floor and what got me up an hour and a half before the sun was a panel with director David Lee Fisher and famous creature man, Doug Jones to talk about an upcoming remake that has me giddy as hell.

What was really cool about the panel was that it wasn’t in the traditional style of Hollywood hyping a horror reboot. Instead, Fisher and his team presented their previous project (something I had no idea existed until then) a “remix” of the Cabinet of Dr. Caligari.

One, you can watch this on Amazon Instant and two, not a whole lot of people jump for joy when someone discusses silent German Expressionist films of the early twentieth century because there are few who see the value such films as Caligari and Nosferatu had on how horror is made. Particularly how important it is that light and shadows play a role in this genre of storytelling. Needless to say, I was excited.

What is really glorious about this “remix” was the way in which Fisher utilized the combination of existing material and new technology. While the Caligari remix was shot entirely on green screen, digital plates from the original 35mm were mapped over and seamlessly became the surroundings and sets creating a visually stunning recreation of Robert Wiene’s film. While I have not yet sat down to watch this recreation, what I did see at Fisher’s panel was brilliant and he added that their Nosferatu project would be similarly recreated, but with more updated technologies (as his Caligari recreation was nearly ten years ago).

Fisher also talked about a new desktop-sharing studio project which should be launching soon called, Beamscreen.com. This, Fisher said that he wanted himself and others, “…not just make a movie, but make an enterprise.” The goal of this new online studio is to provide tools to aspiring moviemakers, screenwriters, and creative minds who are looking to break from the traditional process of moviemaking. The project seemed rather awesome and should be great once it launches, but what was really awesome was Skyping in with Doug Jones and hearing him talk about how stoked he was to have the opportunity to play Count Orlok.

If you haven’t seen the original, the silent German Expressionist film, Nosferatu, eine Symphonie des Grauens, then you should probably get on that as it is available to stream on Netflix, Amazon, and probably even on YouTube. I have seen it with both original German title cards as well as English (I have only seen the original Caligari in German title cards) and they are very enjoyable unless you lack any ability to appreciate the origins of vampires and horror on screen. Max Schreck as Count Orlok (Nosferatu) was pretty amazing and if I could, I would wear this coat around everywhere. 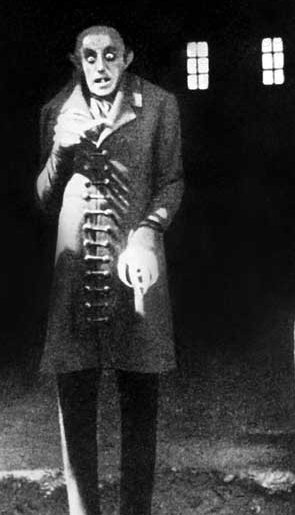 The Kickstarter for the project has a relatively low goal compared to other horror movies out there and the rewards are fantastic. (Seriously, anyone got an extra $165 for that awesome statue for me???) On the plus side, you also have Doug Jones in a role he said he had always wanted to play in the classic style, emphasizing how it was a “perfect fit” for him.

I plan on doing a full review of Fisher’s Caligari before the end of this campaign and even if I can’t sell enough of my limbs to get that statue, they will be getting my money to help support this project (which is already a third of the way there).

So… between all the superheroes and HBO panels (yes, I did attend both big panels), Stan Lee shouting Excelsior! to a cheering crowd, and a fragrant Deadpool conga line, horror lurked around each corner and in every shadow feeding those of us who will soon be out of the haunt season and craving for more scare!

Also, you will be able to find some of the horror-related costumes we saw in our gallery!